Rain falls on Evanston.  I’m hoping it will abate soon, as we have a day of sightseeing in the Loop planned.  Patrick still sleeps.  He worked his evening shift, long after I retired.   I could never accustom myself to being awake while other people sleep but he has his father’s musician genes and a night-owl’s biorhythm.

Tears stung my eyes above curved lips as I left St. Louis yesterday.  I can’t predict when or if I will return.  My brother nailed my sentiment, standing  in front of his house on Thursday night.  As the dark gathered around  us, he asked me again if I was sure I would not be in Kansas City during their next scheduled trip for soccer camp.  I nodded, suddenly unable to speak.  He folded his arms and replied, Well I guess, I’ll see you when I see you.

Slightly bittersweet, it is; and so unexpected.  We’ve never been close but over the last few years, Frank has begun reaching out to his siblings as much as possible.   I asked about it once and he said, Maybe we’re all getting old but I can’t remember what happened to us.  I just want my brothers and sisters around me.  I know what happened.  Life.  An asshole father.  A mother dying far too soon.  A brother surrendering to his pain, leaning against a tree surrounded by columbine.  But I understood what he meant. Why did we not tighten the circle, instead of letting it splinter?

My phone buzzed every few minutes after the listing for my house went live.  The automated showing service demanded my attention but I have the text feature set to announce that i can’t answer when I’m driving.  I don’t understand, please respond ‘yes’ or ‘no’ to accept or reject this showing.   From a truck stop on I-55, I called my realtor in mild desperation and she said she’d stop it.  For the next few hours, the requests kept coming, asking to schedule appointments that evening, the next day, a week from Tuesday.  Laughter bubbled in the confines of the car.  Everybody wants to see my house.  I hope someone likes it enough to make an offer.

My family keeps asking, are you sure?  I’ve never nodded so much, so often, so hard.  No job, little money, few friends, why yes, I’m sure this move is right for me.  At sixty-two.  disabled, no California law license, moving to the Delta ninety minutes south of the worst wildfires in the state’s history.  Absolutely positive.  And not just to get away from my failures, but because when I stand on the Pacific Ocean, the agitation leaves my soul.  The rest is just details.

As I made the turn from Lake Shore Drive to Sheridan, I found myself remembering the day my son turned three.  I had taken him to McDonald’s so friends could assemble the swingset which I had purchased as his gift.  I asked him, as no parent should, what he wanted for his birthday.  He stood on the bench and banged tiny fists on the table.  He proclaimed, I want a father and a brother and a sister and a cat and a dog!  The lady behind him gave me a pitying glance as I leaned forward and told my son to sit down.  I got you a swingset, I murmured.  He reached for a fry and asked if we could at least get a cat.  We Corleys are nothing if not willing to compromise.

We went to Mission Pets the next week and found our Sprinkles, a black-and-white cat who carried him all the way through to his last year of college.  The next spring, a client gave Patrick a Beagle puppy, which  he named Chocolate.   I credit myself for marrying twice, partially in a misguided attempt to fulfill those other, desperate requests of my little blonde-headed boy.

The Eastern sky lightens now, despite the steady falling rain.  In a little while, the man whom my son has become will waken and we’ll figure out how to amuse ourselves despite the weather.  When Sunday morning dawns, I’ll pack my car and head to Kansas City by way of the diagonal.  Eventually, I will find my way home. 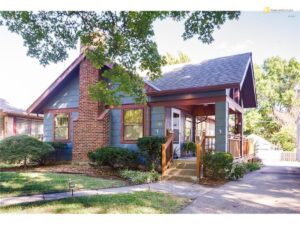 The Holmes House, In which I raised my son.

Sales for delivery by USPS or pick-up
local to Corinne Corley in the California Delta now in process.
The book is available at Prospero's Bookstore in Kansas City, Missouri.
It is also available on Amazon with a Kindle option coming soon. Dismiss