Night softly falls around my tiny house and seeps into the small spaces between the curtain panels.  I raise my eyes to watch the blades of the fan whirring with great sweeps of its deep shadow.  I recall the umpteen browser windows that I had open as I searched for the perfect ceiling fan for my tiny house.  It seemed critical at the time, though I cannot recall what importance I attached to each of its features.

Such decisions now seem insignificant.  My mother’s face has long since begun to fade, but I can picture the smile she might give me and hear the throaty laugh which would herald my insistence that we keep searching.  The perfect pantsuit in eighth grade; earrings for high school graduation; an apartment when I couldn’t bear to live at home — she trudged along as I hunted time and time again.  She knew me when I could earnestly plow through a thesaurus to find a verb which meant this, not that, and certainly not the other.

One day, she would opine, one day you will write a book, and we will be so proud of you.

My mother did not expect me to marry or have children, yet I have done both since her death.  She probably would not have been surprised to see each of my three marriages fail, and she certainly could have predicted my clumsy parenting.  But she never doubted that I would publish.

Mother once spent an entire afternoon at her workplace typing my poetry for me.  She encouraged me to pursue writing contests and publication opportunities that I later learned had no credibility.  When the St. Louis Globe-Democrat hired me as a youth reporter, she overlooked its conservative bent and eagerly cut each clipping with my by-line.  She framed the two essays which I sold to the Christian Board of Publications for one of their magazines, and when the Eads Bridge selected three of my poems, she took me out to lunch to celebrate.

Time passed, and my dreams of being a writer receded.  I succumbed to the advice of supposedly sage teachers who thought I should ‘learn a trade’.  I sowed a few unfortunate wild oats that did not come to harvest; wasted two years on a non-Masters track PhD that lost its funding before I could sit for my dissertation; and unceremoniously wandered through law school.  For the next twenty-five years, I wrote nothing grander than the occasional Letter to the Editor.

When I found blogging, I somehow hit my stride.  I spent ten years sending out weekly Saturday Musings, compiling a staggering library of more than 520 entries.

Over the last four years, I have channeled my mother’s belief in my success as I steadily edited a selection of those essays into a book.  Still, I would not have finished the project if my sister Joyce Corley had not received the torch of encouragement which my mother handed to her when Mother died in 1985.  Now that book finally has been completed.  Anyone who thought I should be a “real writer” has been vindicated, not least my mother, my first and best cheerleader save one.

The gathering of darkness on the California Delta has finished. Its gentleness surrounds my tired bones.  I will put down this computing pen and rest, knowing that I have done what I set out to do.  I hope my mother would be proud, to say nothing of my sister, to say nothing of my son.  They all knew me when this book lived only in the mist of dreams.  Now it has assumed solid form.  I dedicate it to them, and to my little brother, your friend and mine, Stephen Patrick Corley.  I love them all more than words can say. 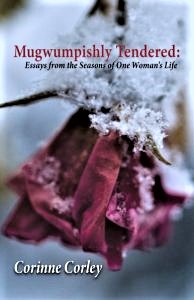 Sales for delivery by USPS or pick-up local to Corinne Corley in the California Delta will commence on 15 September 2022.
Anyone placing a pre-event order will be entered in a raffle for an 8 x 10 print of the cover photo.
See Facebook event for details and restrictions. One entry per person. Must be present at the event to win. Dismiss