Two sentient beings still sleep, though I have already disturbed one of them.  Under the coffee table in the front bedroom, the old dog curls in her tattered bed.  I’d like to buy a new cover for it, but we want her to have familiar smells when she moves to her adopted home.  The boy of my heart, a grown man now, has camped on the couch because I woke at 4 and started trolling the internet in my boredom.  The sound filtered through the floor to the guestroom below me and drove him to the living room.

When I finally despaired of falling back asleep and came downstairs, I did not see him.  I made coffee, washed a few stray plates, and scuffed through the dining room to snag my laptop.  There he lay, under the soft throw that Jennie Taggart Wandfluh gave me for Christmas last year.  His penultimate night in the home of his childhood, and I drive him to cling to sleep in any loathsome corner.  A small shoot of guilt rises within me, but I tiptoe back out and pour a cup of coffee.

Night clings to the neighborhood.   Dark hovers at the window, broken only by the reflection of the spice rack and the cluttered shelf above the stove. The clang of my MedicAlert bracelet against the plastic tray on which I write reverberates in the empty rooms.   I pause, listening to the cheerful, low hum of the furnace.  Lists of tasks that must be done today scroll through my brain.  I reflect, for the thousandth time since waking, that I am insane to do what I’m doing.

With no more than whatever will remain after all the costs of closing and taxes get paid, and the tiny house builder gets his balance due, I’m heading to California in three weeks.  Today we’ll get the dog situated at Ross and Katrina’s house. I’ll spend an hour or two shredding old bank statements at my office.  Tomorrow I will shove whatever office trappings fit into a friend’s van and dump my files where I’ll be squatting for the next six months as I come in and out of town, evolving into a part-time lawyer and full-time writer / job-seeker.  I must be mad.

I’m leaving this house in the dead of winter just as I found it, though without the snow beneath which it huddled 25 years ago when I first laid my hopeful eyes on its porch.  My landlord, Jeff Jones, had dined with its owners and heard their tale of wanting to sell in June.  The husband, an architect, had decided to go to seminary.  The wife, a nurse, wanted only for the family to stay long enough for their oldest child to finish kindergarten.  They needed a buyer who didn’t want to close until June.  I had six months remaining on my lease and a house to sell in Arkansas.

While Jeff worked the lock, I shivered on the screen porch, staring at a wooden plaque beside the front door.  “The Kanoy’s”, it read.  I turned to Jeff.  “Not Rick and Cheryl?”  He nodded.  I knew these people. Our children had been in the same day care    Other kids from “All God’s Children Daycare” lived two or three doors down, a boy and a girl with whom my son had gone on play dates.  I wanted the house already, a feeling which intensified when I walked its hardwood floors and gazed up the stairs at the knotty pine walls of the main bedroom.

We signed paperwork in January, and Patrick and I moved on Memorial Day weekend in 1993.

The pink counters have been replaced by the most God-awful beige synthetic stuff.  The white kitchen floor yielded to fake brown tile.   I didn’t pick these fabrications.  I wouldn’t have changed that pink for anything less than granite.  Unable to afford such upgrades, I would have left it, with its eighties vibe and its flowered wallpaper rising to the ceiling.  These weird improvements got put here by a well-intended soul in 2014, my lost year when i couldn’t stay out of the hospital or lift my head from folded arms for weeks at a time.

But I’m grateful for the new dishwasher, and the double-wide refrigerator, which I’m sure appealed to my buyer.  So I’ll give the awful upgrades a pass; thankful for the effort even if the result lacks a certain panache.

Other changes have been unmitigated blessings:  The capability of laundry on the first-floor; the shower in the upstairs bathroom; the walk-in attic closet; the gorgeous front porch.  I owe each of these to my two spouses.  Ironically, they  professed to hate this house but nonetheless  financed creature comforts.  I thank them.  Their efforts helped me cope here in these last, lonely three years.  I forgive whatever sins they might have also committed, as I hope they forgive mine.  I sweep the debris of our failed marriages into a pile and gently tip the dusty mess into a trash basket.  I leave their goodness on the make-shift table. I’ll carry it with me to California.

As the first light of the Saturday sun spreads across the neighbor’s roof, I stand in the back doorway.  Sounds of children playing in a three-foot pool drift through the years.  A Chocolate-spotted Beagle darts through the backyard, chased by a gaggle of little boys.  One of their mothers calls out; the chasing stops but the laughter echoes.  I call, “You kids get off that slide, you’ll break your necks!”   A voice says, “Do you want them to be afraid of you?” I turn, and the outrage of the gentlest mother washes over me.  “If it saves them from drowning, sure,” I mutter, but I lower my tone when I turn back to the children at play.

This house has its own actual ghost, a man, we think.  He walks about the place and sometimes talks to me.  He often pats my leg as I lay struggling with sleeplessness and pain.  If you do not believe in lingering spirits, then accept whatever explanation you need for the knives which stand themselves on their thin edges and the cabinets which fly open and disgorge dishes from time to time.  We’ve never figured out who he is, but even the most skeptical have seen him flicking by, a quick reflection in a mirror where no one stands.  I hope the new owner doesn’t mind.

Nor should she mind the lingering fragrance of birthday candles; the flowered valance over the sink which only I liked; or the weird concrete pad beneath the washing machine.  I’ve not left much of a mark in Kansas City.  But here, here in the Holmes house, I’ve washed the floors with  tears and pruned the bushes with loving, spastic hands.

I hope she’s happy  here, my buyer.  And as my son takes his backpack and his clean laundry out to his little Kia at the bottom of the driveway for the last time tomorrow, I hope he carries with him some sense of belonging with which to make his way in this often wicked world. 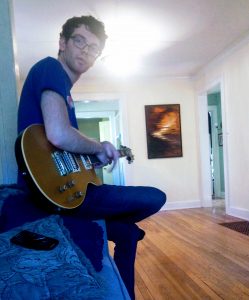 If you like what you read, please tell your friends about this blog.
5
SHARES
ShareTweet