I’m getting good at asking for help, so when my friend Richard said, do you want me to carry the plants into the house, I said, sure.

And soon enough:  I stood like a queen surveying her upper forty, surrounded by vibrant verdancy.  I told Richard about my mother and her 269 house plants, and then I made coffee.  Our conversation moved to other subjects — my son, his children, and onward, to Big Sur, to childhood.  But my heart lingered in the sunroom amid my mother’s shelves of plants.

My father stands in the wide expanse of the room at the back of our home.  He stares at the nine windows and the hanging ivy.  He steps forward, lifting one hand as though to pick at a faded flower.  It’s August.  The throb and hum of the air conditioning does not extend back this far in the house.  He’s tried to keep the plants healthy.  We’ve all tried.  But only Ann inherited Mother’s green thumb, and Ann lives in St. Paul.

They had taken Mother’s body away a few hours ago; over Steve’s protest, over my sobs, despite the gaggle of Dick-and-Lucy-Corley kids on the lawn with their terrible grim faces.  Daddy hovered in the back.  He’d forfeited his rightful place in the doorway of the funeral home’s van years ago.  We no longer even questioned his reluctance.  The mortuary guy spoke to Ann, to Kevin, maybe to someone else but lastly to Stephen.  They argued in loud voices.  Stevie wanted to ride in the back but the driver resisted.  He seemed to think he’d lose his job.  Or get a ticket.  He insisted that Mom would be all right.  We stared into the empty cavern where the stretcher sat and finally someone, Ann I suppose, said, “Steve, just let her go.”

He fell into my arms, my six-foot-two baby brother.  I held him.  Years later, I’d lament that my grip had not been tighter.

Daddy says, “What am I going to do with all these plants?”  I ask, “How many are there?”  He takes another step towards the nearest shelves. Again, he lifts one hand.  “Two-hundred sixty-nine,” he answers.   I divide by eight, then reconsider.  Ann can’t take any plants on the plane.  I recalculate and speculate as to how many I can get in my car for the ride back to Kansas City.  Then I think about Steve, whose marriage has faltered on the unlikely rocks of maternal care-taking.  He had moved into the house to be the night shift when the hospice nurses began reading hell-and-brimstone Bible verses and upsetting Mom.

“Maybe Steve will water them,” I suggest.  Daddy just shrugs.  We fall silent again.  The smell of life surrounds us:  The heady fragrance of wet earth, the pungent herbs, the sturdy scent of begonias.  I hear a noise and realize that my father has started to cry.  “Oh Pops,” I whisper, as the warmth of the sun streams through the windows, and the plants rise to its caress.

Later, much later, when the body has been buried in its simple oak box and all the secretly spiked coffee has been consumed, we count the plants again.  The local siblings each take a share.  I pick three or four and load them into my car, with Mom’s stereo.  My father packs her pillow around the turn table to keep it steady.  I’m wearing the green socks that I took from her feet the morning of her death.  That was my last chance to touch my mother and I did it as gently as I could.  She always wore socks when she slept.  I felt like a traitor, but I needed something which had been close to her skin. I couldn’t send her out in public without her nightgown so I took the socks.

I wore them for years, until they finally disintegrated in the wash.

Looking at the lawn this morning, I see no signs of the early frost.  I stand in the breakfast nook, breathing deeply, taking the smell of rosemary and sage into my lungs.  I drink strong French roast from my purloined crystal mug.  I steady myself against the door frame, eyes closed.  I don’t have two-hundred and sixty-nine plants.  But the dozen or so which I’ve got would make my mother proud. 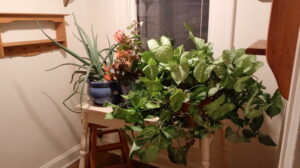 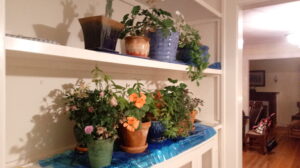 If you like what you read, please tell your friends about this blog.
25
SHARES
ShareTweet