My body no longer serves as a temple, if ever it did.  It’s an efficient machine now, rejecting anything less than perfect fuel.  My usual two scrambled eggs with gluten-free toast fills me beyond comfort.  I walk around, stretching my weakened calves, waiting for the dog to wake so I can let her out before I start writing.

I’ve got a few scant weeks left in this house.  Time enough for packing what little more the tiny house will hold and giving away whatever remains that could be of use to anyone.  The three shelves hanging bare in the breakfast nook will find their way to wooden walls and hold the small allotment of mementos that I’ve kept.  A handful of precious knick-knacks still stand in the secretary.  These might go on Etsy, or maybe I’ll wrap them to give as gifts this Christmas.

I’ve got to clean the yard.  Last night when I came back from Third Friday on 39th Street, I caught a glimpse of the rat-trap that’s been lying under the deck for the last three years.  I never actually saw that rat, but I spied its droppings and cleaned away the chewed tomato on the counter.  I didn’t blame it.  The winter had turned sharp and bitter.  I would have tossed the fruit outside for the rat’s convenience if I’d known he needed it.  I just didn’t want him on my counter.

I saw a rat there once, in 1993, the first year that Patrick and I lived here.  He slept in the front bedroom, soundly, never waking.  I never had the same luck.  I got out of bed thinking to fix a cup of tea.  The breakfast nook had doors then, bi-folding slotted panels.  I pushed them open and snapped on the kitchen light, crossing to the stove.  A noise caused my head to turn, improbably, distractedly.

I saw the critter right away, and he saw me.  His eyes narrowed as he froze.   There I stood, on the far side of his retreat, and he just inches from the light switch on the other side of the sink from my clean dishes.

I thought about my toddler lying innocent and sweaty under his Mickey Mouse blanket.  Stories of children bitten in the night rose in my gut, bile like the agitated gunk from a bad Mexican restaurant.  I knew that the rat could not exit until I did.  He’d hold my gaze as long as needed to intimidate me so he could skitter away.  I had to turn out the light and dash out of the room in one swift motion.

I’ve never moved so fast.  As I stumbled into the dining room, I heard the mad clattering of the rat going across the drain basket.  I fell into a chair and cursed.  I’d have to wash those dishes a thousand times before I could use them again.  I’d throw them out.  We would wrap them in a plastic trash bag and put them in the recycle bin.

My next thought pulled me from the chair and sent me flying into my son’s room.  I turned on the overhead light and pulled the cover from his slight form.  The world stood still.  Then:  convinced that every inch of him remained unmarred, I sank to the floor, where, eventually, I slept, impervious to my own danger.

In the morning, I called the man whom I had been dating.  He sent around a worker to look for burrows in the ground around the foundation.  Patrick and I stood in the yard, watching the wiry man shovel rocks into holes which he thought the rats might have dug, impressions really, nothing huge but big enough for the flexible, spineless creatures.  After sunrise, an Orkin man arrived with sticky traps. I stared in horror.  He assured me that the rats would die quickly, soundlessly.

He lied.  They screeched in terror through the night.  I got no rest at all.  My son crawled under my blankets and hid himself against my flannel robe.  He drifted into a fitful sleep just before dawn.  I called the Orkin guy early on Sunday and insisted that he come remove the yellow pads and the shuddering carcasses clinging to them.

Home ownership has nearly conquered and exhausted me.  But at times like this, early, quiet, serene, I don’t mind it.  I sit on this blessed couch and stare out the window at the broad clipped crown of the Japanese maple.  I wonder, will I ever see a Midwest autumn again?  Leaves drift from the bigger maple  on the other side of the yard.  The fluttering red piles gather around the most prominent feature on my lawn, a sign announcing that a contract pends.

The old dog stirs.  I let her out, but without much thought, with routine and careless motions born of a decade of monotony.  I think about the cemetery, where my in-laws lie.  I’ll take some fresh flowers this morning.  They’ll appreciate that; and even if they don’t, I need a few minutes with my favorite curmudgeon.  Later, in the waning morning, I’ll drink another cup of coffee and watch the branches of the tall old tree dance in the rising wind. 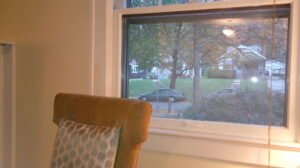 If you like what you read, please tell your friends about this blog.
3
SHARES
ShareTweet